Mundo Series precast concrete landscape containers embody the “less is more” philosophy that runs throughout much of Larry Kornegay’s work. The silhouettes are elemental, universally known forms that don’t belong to just one era, culture, or region. Kornegay chose the Spanish language word, “mundo,” translated as “world” in English, for its universal appeal. Beyond the definition, Larry finds that the comforting sound of the word “mundo” relates to the containers’ fluent and tranquil profile.

Born from the Earth

“When I was younger, I spent fourteen months in an apprenticeship with a man who restores prehistoric artifacts,” remembers Larry Kornegay. “So I based the Mundo Series around some of the old pots we were restoring at the time. These pots weren’t highly decorated ceremonial items, but rather plainware intended for everyday use. Working with these prehistoric ceramics, I felt this undeniable energy—feeling the maker’s fingerprints and feeling the effects of centuries of use and weathering, I felt a strong connection to the earth and its people. This is what I was trying to communicate in Mundo.”

Mundo are round concrete landscape containers featuring a heavy sandblast finish. Three sizes range from 17” to 46.5” tall and 30” to 46” in diameter. The planters ship with the standard 2-⅜” diameter drainage hole, or custom hole to function with irrigation & drainage plumbing. The Mundo Series is available in 9 standard colors, with additional color mixing available, and can be finished in a bituminous sealer (suggested for interior applications) or sandblast finish.

All weights are approximate. 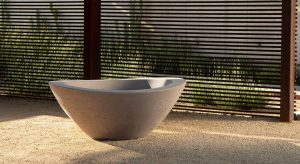 The rhythmic imagery created by desert sand dunes is the inspiration behind Dune’s contour and form. 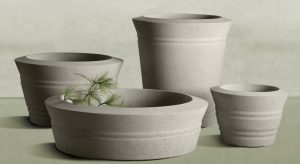 “The quality we call beauty always arises from the reality of life,” is a philosophy shared with Masaru Kawasaki. 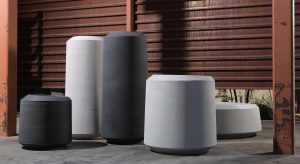